It’s a recovery but a very muted recovery

The Job Barometer Team at Cornell University’s Program in Real Estate cheered this week with news from the Bureau of Labor Statistics that non-farm payroll increased by 192,000 in February, and that private sector jobs increased by 217,000 according to ADP. Many economists feel that the United States is finally turning the corner on job growth and that we’re starting to see the type of recovery that many Americans have anticipated since 2009. “It’s a recovery but it’s still a very muted recovery,” said Nigel Gault, chief U.S. economist at IHS Global Insight, a forecasting firm. “[However], to get to a strong recovery, you’d want to be adding 300,000 to payrolls a month. We’re clearly a long, long way from that.”We will continue to monitor these numbers in the coming months in anticipation of continued improvement. 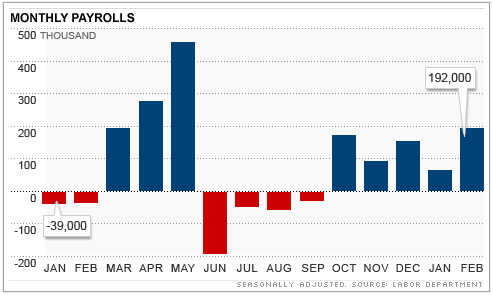 More positive news in the March BLS report came in the form of unemployment retreating below 9% for the first time since April of 2009. Although the labor force also decreased by an estimated 87,000, the drop in unemployment over the last three months (nearly one full percentage point), shows the most rapid improvement in more than 25 years.

So what does this mean for jobs in Commercial Real Estate? According to SelectLeaders/Cornell Job Barometer research, jobs posted on major Commercial Real Estate job boards in the last week of February(237) represent the most activity since November of 2008, and have gradually increased from the low of 106 in August 2010. These numbers give hope to many Real Estate professionals that this type of job growth is sustainable and has a positive impact on the down-trodden industry going forward.

According to Susan Phillips-LoPinto, CEO of SelectLeaders Real Estate Job Network, “The tide really turned in October 2010, as employers started buying large packages of job postings in anticipation of 2011 hiring. From October to January, over 1000 job postings had been purchased on the SelectLeaders Job Network alone.” Additionally, Phillips-LoPinto said that “job applications doubled in January 2011, compared to the last quarter of 2010, indicating that our industry has not lost the professional talent to fill these opportunities, as we feared might happen if jobs did not return. Although we are still 50% of where we were heading into 2008, when we hovered around 1000 job opportunities available on the site, we are witnessing a slow recovery, one sector at a time, that feels steady and solid.”

According to data analyzed by the Program in Real Estate at Cornell; California, New York and Texas represent nearly 75% of all Commercial Real Estate job postings so far in 2011. As investors find their way back into the real estate capital markets, look to the financial centers in New York and California to consistently deliver more job postings than any other states. A savvy job seeker should focus his/her efforts on these areas to find the greatest number of opportunities within the Commercial Real Estate industry.

Lastly, as Commercial Real Estate professionals look for signals that an improving job market is on the horizon, don’t overlook construction job data as an important piece to the puzzle. According to the BLS, construction jobs grew by 33,000 in February after falling for the better part of the last two years. With construction jobs increasing; jobs in development, asset management and finance are sure to complement those construction jobs as shown in the chart below.